.....and I thought keeping a blog would be fine and dandy & could update every couple of days or so...how wrong was I??
Been keeping busy these last few (ahem) weeks since I last blogged. Regular produce markets we attend have been fairly quiet but the shops we supply have been busier.Not normally this busy early in the year, maybe it's down to the fact we've had a mild winter and people are out and about a bit more....not complaining,mind you.
Have had time to make a few cakes and have been making 1 or 2 a week since early January. It's something I love doing, creating a unique cake for someone's special occasion that they can't get anywhere else.I can really only do them the beginning of the year as once Easter comes it's food festival silly season and I don't have the time. The cake this week was a 3 tier Toy Story themed one, stood nearly 2 foot high and weighed a ton! (12",10" & 8") But it's one of those big, showy off cakes,just right for a big party...colours lovely and bright & I was very pleased with my 'Rex' on top 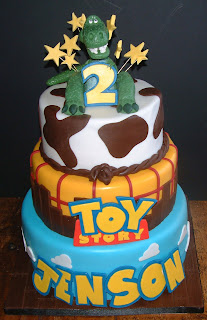 Application forms for food festivals have come in early this year...a lot of them seem to clash,which is a real shame.We'll be doing many of them for the 3rd year running and a couple of newbies!  Really chuffed we've been able to get into Ludlow Spring Festival this year. A few of the festivals organisers like you to apply now and complete paperwork to express an interest...but the thing is, they don't let you know that you've been accepted  for quite a while and in the meantime another  event has been booked in it's place.
Trade exhibition day at Withybush showground on Tuesday...Ryan will be there, not that we have a lot of spare time to supply another business mind you!  Next weekend is the Get Welsh in Swansea 2 day festival, Sat & Sun....we'll be in Castle Square, find us by the fountain ( Note to self : remember not to drink too much coffee this year ...sound of running water & all that!!)

Back to cakes, and how is this for a monster wedding cake...apprently it's 17 foot tall weighs 15.032 pounds which is heavier  than 5 Volkswagon beetles and can feed over 59,000 people. Made in Connecticut for an attempt at the Guiness World Record ...had to be American didn't it?!

Clare
".... was a nurse for 23 years..gave it up to run my own foodie business.It all started by baking & decorating cakes for friends & family....funny how things can just snowball! Now attend over 30 food festivals all over Wales, regulars at local markets & supply to high end coffee shops & restaurants. Winner of a Wales True Taste award for my chicken & coriander curry (my own unique top secret recipe) Now that hubby has joined me in this mad food fuelled business, we are both working hard to develop the business for 2012.. there are big plans in the pipeline what with online sales coming soon..hopefully! and plans to take LWD further afield.But, not forgetting that we love doing what we do & making people happy with our food. Do I miss nursing?? Big, fat No...but let's just say that if David Cameron asked me, I could tell him how to fix the NHS...something I still care passionately about, and I bloody well should 'cos my nan knew Nye Bevan!!! Don't get me started on that one,there's just not enough room on this blog!" Clare x